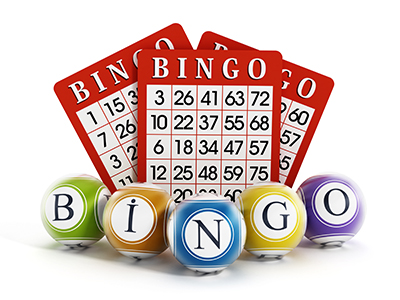 BINGO! BINGO! BINGO! The excited call of "BINGO!" bouncing off the walls of Lippincott and Smith Halls here at the Illinois Veterans' Home is a sure indication that the residents are at it again. With their cards spread before them and fingers poised to cover those so important numbers, countless Bingo aficionados are listening intently to the man on the stage up front. "B-7. That is B-7." The players are oblivious to everything but their cards and the voice of the caller. Played by just about everyone everywhere, it has become an American phenomenon. It hasn't always been that way however. This now well known American lottery has an origin that can be traced thousands of miles away and almost 500 years ago.

The game as we know it today is a direct descendant of the Italian National Lottery, "Lo Giuoco del d'Itlalia.." Organized in 1530, it has been played regularly to this day, along with red wine, is indispensable to the Italian economy. Before too many years went by the lottery type game reached around the known world to become known as Lotto. Its wide acceptance in America began in 1929. It was in August of that year when Mr. Edwin Lowe, a toy manufacturer and salesman stopped in Jacksonville, Georgia for a rest on his trip. While there, he chose to visit a small carnival just outside of town. He found all the exhibits and booths closed, save one. A large, well lightened tent was jammed to overflowing with people. All attention seemed to be centered on one large group of tables covered with numbered cards and beans. Common, ordinary beans. They were playing a game called BEANO, a variation of the European Lotto. Each player had several cards and held a handful of dried beans. The caller, or pitchman, pulled small numbered discs from an old cigar box, calling out the numbers to the anxious crowd. The players, if they found that number on one of their cards, would cover it with a bean. This would continue until someone covered a complete line of numbers, whereupon they would leap wildly to their feet, screaming "BEANO - BEANO!" For this a small prize was awarded. Lowe said later The people were almost addicted to the game."

Arriving home after his trip, Ed Lowe bought a sack of beans and some cardboard. Making his own game, he invited a few friends to his apartment and introduced them to the game of BEANO. He was quick to notice they were soon playing with the same intensity he had seen at the carnival. One of the players became more and more excited as she added beans to her cards. When the winning number was called, she jumped to her feet and stuttered ..."B-B-B-B-Bingo!" In relating the experience Lowe said, "At that moment I knew I had to produce the game, and it would be called "BINGO!" The rest of the story is history.

Several months after BINGO had very profitably hit the market, a priest from a church in Wilkes-Barre, Pennsylvania wanted to use the lottery as a fund raiser. A deal was struck, and the church was soon out of debt. It wasn't long before BINGO was adopted by other churches, as well as social, fraternal and veteran's groups, and ultimately commercial establishments around the country. Today, Bingo games take place every week with hundreds of thousands of dollars being spent annually on admission and gaming fees. BINGO has taken its place alongside baseball, Mom, and apple pie as a symbol of America.

Bingo enthusiasts are determined, almost fanatically dedicated to their game. Here at the Veterans' Home it is by far the most popular activity to be found among the residents. Like participants in any game, Bingoists each have their own idea of how to approach the possibility of winning, although BINGO is to the Nth degree a matter of luck. Most play for fun, but there are many who firmly believe that fortune can be influenced to smile upon the, Numerical analysts and mathematicians are usually of the opinion that it is governed by the laws of numerical probability. It is true that the chances of winning increase as the numbers remaining to be called decrease. The player who wants the greatest likelihood of winning is the player willing to devote the time and effort to studying the possibilities. There are several good books available to help do this. THE ART OF PLAYING BINGO by B. Hartwell, and HOW TO BINGO 75 WAYS by Joel Rudinger. Another thing to bear in mind is the selection of your cards. With 24 numbers on a card, having them duplicated on another card reduces your chance of winning. Many believe that the more cards you play, the better possibility of being a winner. NOT SO! The more cards the greater the possibility of repeated numbers. Experienced Bingoists tell us that four cards is the best option. Two, carefully chosen is about as good as you can get. Of course, playing in small games is good strategy. The fewer cards in the game, the greater the likelihood your numbers will be called. And that works better than carrying a rabbits foot.

So, there you are. Call it what you will. BINGO - BEANO - or one of the more colorful epithets used by a perpetual loser. BINGO IS BINGO IS BINGO. It's here to stay. As well it should.